A View from the Golan Heights.

Notice the homes in the valley? Now look to the upper left corner, there are homes on the sides of those mountains. We stood upon Israel’s frontier as we looked out at the Jewish settlements in a valley that borders Lebanon. The beauty of the valley seems idyllic, and it would be except for war. Fire from Lebanon’s mountain side often disturbs the peace. Yet they stay and build and farm determined to never again lose the land they had regained.

Israel regained a portion of an eternal land grant that God gave to Abraham, Isaac and Jacob. God had expelled them, and now, for His reasons, He is bringing them back. In the face of danger these settlers of the frontier are determined, but they still don’t understand.

He sees His chosen people whom He evicted after they rejected His Son. They were dispersed  throughout the nations. The time had come to bring them back, and through the guilt of the nations they returned after WWII. Fifty years ago in another war God gave them all of Jerusalem. They have built cities and made the desert bloom, yet they are still without peace.

Some have read the prophets and know that the time of Jacob’s trouble is coming. “It will come about in all the land,” Declares the Lord, “That two parts in it will be cut off and perish; But the third part will be left in it. And I will bring the third part through the fire, Refine them as silver is refined, And test them as gold is tested. They will call on My name, And I will answer them; I will say, ‘They are my people,’ And they will say, ‘The Lord is my God.'”  (Zechariah 13:8-9)

What did religious Jews think gazing upon the Golan? 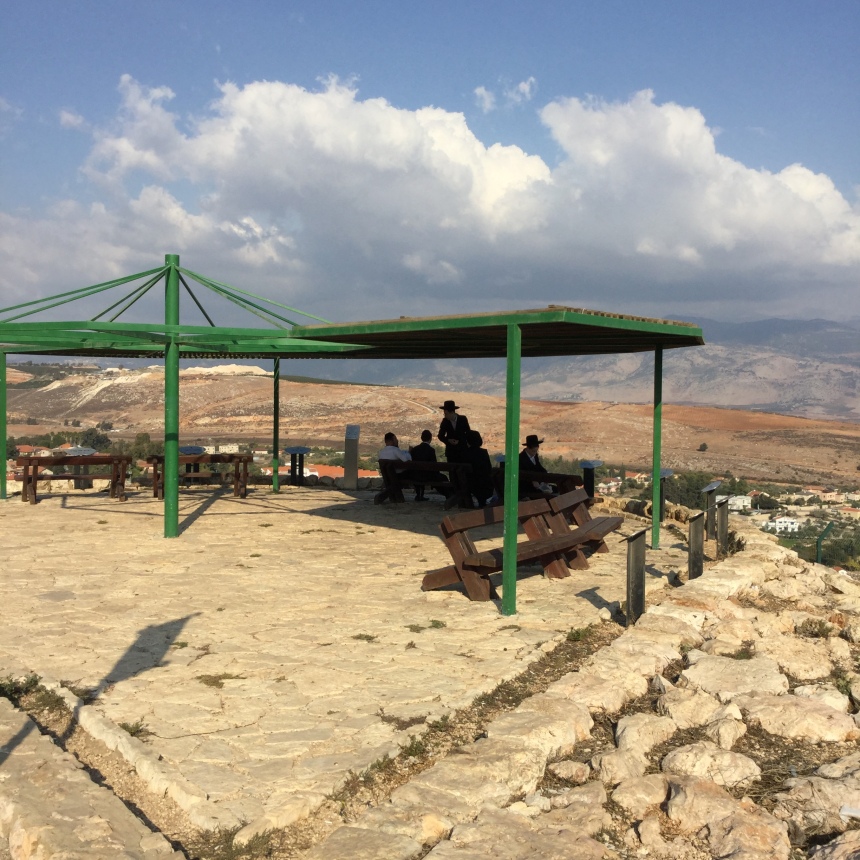 They were there having lunch when we arrived. Their dress told you that they considered themselves to be holier than the rest. As they looked upon the Golan did they hear the words of Zechariah saying, “Behold, a day is coming for the Lord when the spoil taken from you will be divided among you. For I will gather all the nations against Jerusalem to battle, and the city will be captured, the houses plundered, the women ravished and half the city exiled, but the rest of the people will not be cut off from the city. Then the Lord will go forth and fight against those nations, as when he fights on a day of battle. In that day His feet will stand on the Mount of Olives, which is in front of Jerusalem on the east; and the Mount of Olives will be split in its middle from east to west by a very large valley, so that half of the mountain will move toward the north and the other half to the south. You will flee by the valley of My mountains, for the valley of mountains will reach to Azel; yes you will flee just as you fled before the earthquake in the days of Uzziah king of Judah. Then the Lord, my God will come, and all the holy ones with Him.” (Zechariah 14:1-5)

A third of Israel will one day be saved because of God’s love for the fathers. It will not be their determination, but by God’s will they will be saved. I pray that stubborn and stiff-necked Israel soon comes to understand that it is “Not by might nor by power, but by My Spirit,’ says the Lord Almighty.” (Zachariah 4:6) In their troubles they will call upon Yeshua Ha-Mashiah,  Jesus the Messiah.